Ray Kroc expands the McDonald’s restaurants through franchisees, pulls the company from the brothers and creates a multi-billion dollar empire. 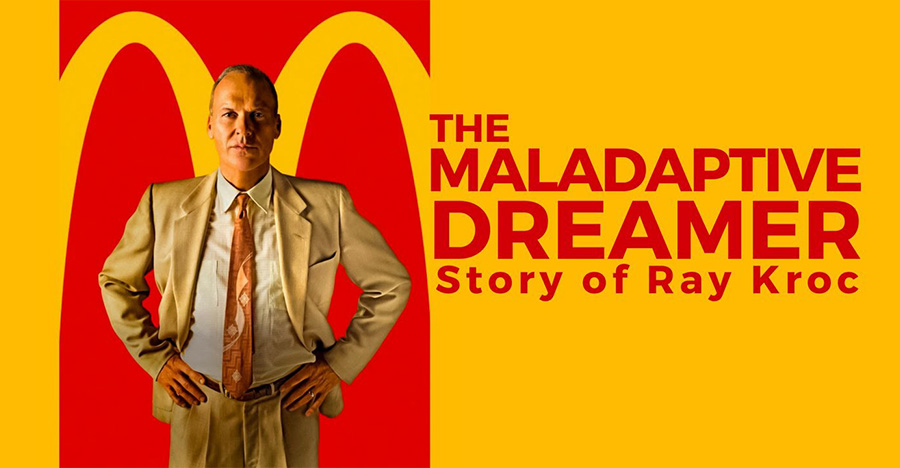 ‘The Founder’ movie shows the story of Ray Kroc, a struggling salesman turned Founder of McDonald’s. In 1950s, Ray Kroc met Mac and Dick McDonald, who were running a burger operation in Southern California. Ray was impressed by the brothers' speedy system of making the food and saw franchise potential. Ray expands the McDonald’s restaurants through franchisees, pulls the company from the brothers and creates a multi-billion dollar empire. This movie teaches many important business lessons, a few of them are as follows:

Curiosity is an important characteristic to get fresh ideas.Ray Kroc was not able to sell his milkshake machines at many restaurants, but when he got an order of 6 machines from a far away restaurant, he got curious to understand why so many milkshake machines were ordered by a single restaurant. Here, he could have simply delivered the order, could have avoided travelling a long distance to figure out the reason, but he was curious and decided to visit the restaurant.

Just because something is not done in the past, doesn’t mean it can’t be done in the future. Innovators refuse to accept status quo and inefficiency. They explore new ways by taking inspiration and ideas from various fields. To improve the efficiency of their business, McDonald brothers Mac and Dick took the assembly line concept perfected by Henry Ford for cars and applied it to hamburger business.They optimized it for their business through chalk drawings on a tennis court and orchestration of their team members’ steps. They made sure that speed should not impact quality standards on everything from cleanliness to the number of pickles per patty.

When a business provides what customers need, it doesn't have to convince customers and look for them. Supply of the right product creates demand.Drive-in restaurants were already popular places in America but the wait was usually long, and often food was wrongly assembled when arrived. This was not the case at McDonald's. As compared to many other restaurants that Ray Kroc visited, McDonald’s was able to serve the high-quality food at lightning-fast speed and low cost without sacrificing quality. Though McDonald’s had huge lines, customers were happy with quality and service.

Thinking big requires stretching the boundaries of possibilities. It enables acceptance of new challenges and creation of capabilities to overcome those challenges. McDonald brothers innovated and mastered the efficient restaurant business model and decided to have one best in a class restaurant instead of multiple mediocre restaurants. Ray Kroc thought big and with his persistence, he innovated and mastered the art of business expansion through franchisee model.

Visionaries manage to get people on board by appealing to their emotions and aspirations. McDonald brothers were passionate about the product - hamburgers, whereas Ray Kroc was passionate about business potential. He convinced them for expansion through franchisees by making them visualize that “McDonald’s can be the new American church… And it ain't just open on Sundays.”

Partners should be selected for adding value instead of just giving their name and money.More than experience and resources, a strong desire to come up in life matters. To scale up McDonald’s, Ray Krock wanted to have multiple franchise owners who follow his guidelines of standardization, automation and discipline. Firstly, he selected a few rich franchise owners, but he found that they were not following his inputs. Later, he carefully selected hard-working middle-class individuals for their work ethic and ambition. This idea proved to be hugely successful as these new franchise owners were focused and willing to follow Ray Krock’s guidelines.

Instead of falling in love with one innovation, to remain competitive, it is important for businesses to spend time and effort in creating the next innovation. McDonald brothers brought efficiency by innovating assembly line operations for their restaurant. They focused on just a few high selling items such as burgers, fries and drinks, and figured out an efficient way of order delivery. For scaling up the business, Ray Kroc introduced standardization, automation and discipline. Later, for reducing the cost, Ray Kroc pushed a vastly cheaper powdered milk for the shakes as opposed to buying and freezing the ice cream.

Giving up on tough situations is an easy option, but with the ability to tolerate frustration, one can create his path for success. McDonald brothers refused or delayed on many ideas of Ray Kroc such as using powdered milk, tie up with Coca Cola, renegotiation on contract terms, basement in store etc. Instead of giving up, Ray Kroc tolerated the frustration, for the time being, he had lesser power, found new ways and rules to make himself more powerful than McDonald brothers and then controlled the business terms and conditions.

Some of the greatest business models are created by looking at the challenges and situations from a fresh perspective.When Ray Kroc was going through financial challenges, he met Harry Sonneborn, a financial expert who gave him a new perspective that Ray Kroc was not in the food-service business, he was in the real-estate business. Harry showed him another way of making money off the deal with McDonald brothers on selling hamburgers and franchisees. This new way involved creating a real estate company that would buy up (or lease) the land on which all McDonald's would be located.

Well negotiated legal contracts create defenses and add to competitive advantages. Initially, Ray Kroc agreed to a complex contract that stipulated that all business decisions must go through the McDonald brothers. Later, instead of putting in writing the deal of providing 1% of McDonald’s earnings to McDonald brothers, Ray Kroc offered them a handshake deal on this term. The movie shows that McDonald brothers were legally forbidden from using their own last name on the signage of their restaurant and they were unable to prove their handshake agreement and were thus denied any royalties from the McDonald’s corporation.

Author Info:
This article was first published by Harsh Pamnani on Entrepreneur India