Is Asia driving the Bitcoin craze?

Tucked away in a quiet corner of Singapore, the industrial complex looks like an underground ghetto. 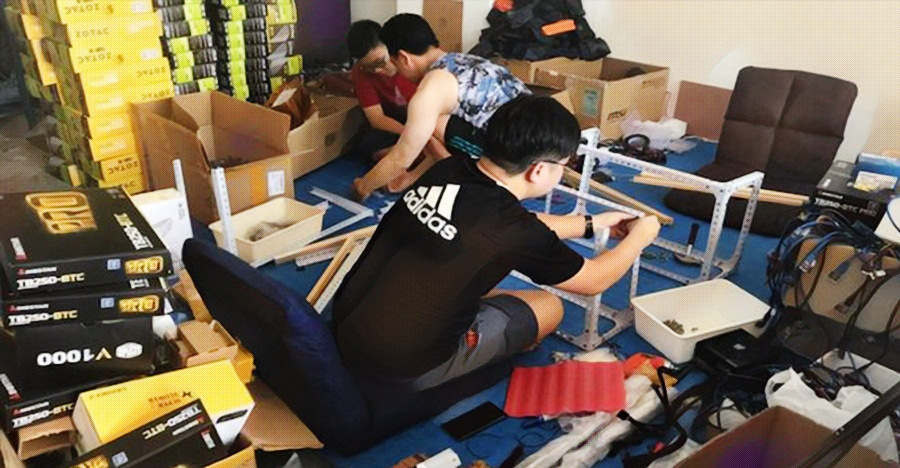 Tucked away in a quiet corner of Singapore, the industrial complex looks like an underground ghetto.

But this, says Dexter Ng, is the workshop of the future.

A self-professed cryptocurrency entrepreneur, he's the chief technology officer of SG Mining - a business making and selling rigs. These are the powerful computers that solve complex mathematical problems in a process that earns their owners digital currencies such as Bitcoin.

"Previously we could only sell two or three of these rigs a week," he tells me as we walk around the cemented warehouse. "Now we can sell hundreds."

When it comes to the Bitcoin industry, Dexter Ng has been there and got the t-shirt

Some of these machines go abroad, including Japan.

Getting hard data on just how many Japanese investors have bought into the digital currency is difficult, because there's no central body that oversees it.

But Japan was the first Asian country to recognise Bitcoin and has built trust by fully legalising cryptocurrencies.

Recently a Japanese firm announced that it would start paying a portion of its employees salaries in Bitcoin.

Australia is another country in the region that has embraced the cryptocurrency, but now is moving to regulate it because of the way amateur investors are piling into the market.

So is it fair to say Asia is driving the Bitcoin craze?

At one point Chinese investors reportedly made up at least 80% of Bitcoin ownership, but Beijing is now being cautious.

Worried about the outflow of funds into the market, China effectively banned cryptocurrencies by outlawing initial coin offerings, or ICOs, which are basically public share offerings that are invested in via the use of digital currencies.

And it's not alone.

Vietnam banned Bitcoin and other digital currencies. India and Indonesia are considering regulation.

And just this week, Singapore has changed it's previously moderate tone on cryptocurrencies to one of extreme caution - warning its citizens about the "significant" risks they take on if they choose to invest in them.

Bitcoin ATMS - like this one in Hong Kong - are increasingly common

But that hasn't stopped investors here from trying their luck.

At a Bitcoin exchange in Singapore, I meet a group of enthusiasts who each put in about $100 (£75) a week to buy the digital currency.

"It is the currency of the future," one man tells me, refusing to divulge his name because he didn't want his employer to know he was buying Bitcoin.

"If you say this is a scam, then didn't the financial crisis teach us that all financial institutions are scams anyway?"

Bitcoin emerged in the aftermath of the global financial crisis. It's often seen as the currency of choice for institution-weary millennials, but has also been used by money launderers, criminals, and drug buyers and dealers.

Increasingly though, more Asians are starting to see it as a way to make some quick cash, but also as a way to safeguard their savings against political crises and low interest rates.

"Many of our customers see it as a form of digital gold," Zann Kwan, founder of the Bitcoin Exchange tells me.

Analysts also point to the low or zero interest rate environment in Japan, the strict regulations on getting money out of China, and concerns about the North Korean crisis impacting the economy in South Korea as reasons why so many in Asia are trying to cash in on the Bitcoin craze.

But they may already be too late.

"The quick money has clearly been made," says Dheeraj Bharwani, an independent wealth strategist who has recently started advising his clients on acquiring cryptocurrencies.

But that hasn't stopped some businesses from cashing in on the crypto craze in Asia.

Accepting cryptocurrency has become a selling point for some businesses

On the top of the Singapore Landmark Tower is the Skyline Crypto Club. Customers can pay for their drinks using Ethereum, another popular and increasingly valuable digital currency.

For now, it makes up only a small percentage of transactions, but club owners expect that to grow.

"We are even offering a New Year's Eve Bitcoin package, where you pay for your night using a Bitcoin," the club's manager Subhaish Rajamanickam tells me.

But Bitcoin is so volatile, there's no telling whether it will be enough to get you a cocktail or two in the future.

Author Info:
This article was first published by Karishma Vaswani on BBC

Japan firm says it will pay part of salaries in bitcoin