Who is Alibaba's biggest shareholder?

Clue: they invested 14 years ago 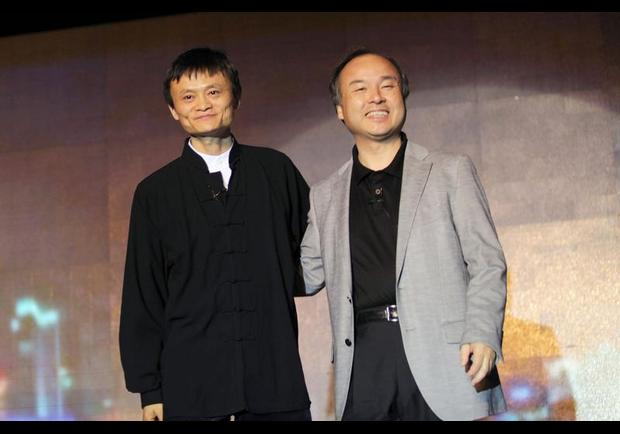 In 1999, Jack Ma persuaded an investor take a stake in the company he had founded a few months earlier. It took six minutes for Masayoshi Son, the founder and current CEO of SoftBank, to invest US$20 million in the company. It proved to be a golden moment for both Alibaba and SoftBank.

The subsidiary of Softbank, SoftBank Ventures Korea’s investors said that Son invested in the company for two main reasons. First, Son invested in Jack Ma, an outstanding businessman. He believed that the company would become the best e-commerce company in China. Second, he saw the big market in China. “If you had the chance to read the business plan of Alibaba in 1999, you might find out that the company did not intend to succeed in the way that they are actually focusing on these days.” Later, as e-commerce market grew exponentially, Alibaba grew with this wind in its sails.

Son’s investment paid off upon Alibaba’s IPO 14 years later, with SoftBank now the biggest stockholder with a 34.4% stake while Yahoo has 22.6% and Jack Ma has 8.9%. According to Bloomberg, following the offering, Son became the richest man in Japan with a personal fortune of US$16.6 billion, overtaking Tadashi Yanai, CEO of UNIQLO.

Masayoshi Son and Jack Ma have one thing in common: they started their business from nothing. Masayoshi Son (also known as Jeong-ui Son) was born in Japan to a Korean immigrant family, whose grandfather was a mine worker and father was a fish merchant. When Son was a high school student, he met Den Fujita, the CEO of McDonald’s Japan, who influenced him to study English and computer science. At age 16, he decided to study abroad and chose the U.S. Whilst he studied at UC Berkeley, he developed a translation device. With the $1 million patent fee he received from Sharp Electronics, he founded SoftBank, a software retail company in 1981. The company now operates as a phone company throughout the U.S. and Asia. In the US, Son acquired carrier Sprint on July 2013 to compete with top players like Verizon and AT&T.

SoftBank Ventures Korea: investing in the next Alibaba

SoftBank Ventures Korea has, like its parent company, proved to be a savvy investor, investing and successfully exiting more than 12 companies. SoftBank’s portfolio’s ‘Hall of Fame‘ includes SundayToz, a mobile game service company that developed AnyPang, and Nexon, a global developer and publisher of free-to-play (F2P) PC and mobile online games.

The VC has formed ten funds focused on IT, with 157 accumulated portfolios. The VC currently runs capital of approximately US$217 million, investing in diverse areas like mobile service, E-commerce, education, mobile security and industrial tech. For example, Stronghold Technology produces a smart coffee roaster that optimizes temperature and pressure for the best tasting coffee. The machine is expected to revolutionize the coffee industry, where gas-powered machines are dominant. Other portfolio companies include mobile-based healthcare device developer Healcerion and X-ray inspector manufacturer, Xavis.

“Business plans are subject to change, but entrepreneur’s passion and capacity would not change. We invest in companies based on the founder’s ability to overcome the difficulties that he encounters and his executive ability,” the company’s manager Kim said. The company has invested in Chinese company Wandoujia and looks forward to creating future funds for China, and to investing in companies blooming throughout Asia.

5 Ways To Find Angel Investors For Your Tech Startup

The new iOS App Store lets devs choose whether or not to reset ratings...

7 Ways to Turn Instagram Followers Into Customers for Life

Why Problem Solvers, Not Whiners, Always Win in Business