Whether it's an investor who gives a startup a term sheet with no capital behind him, or an entrepreneur who raises millions of dollars with nothing but air, the startup world has a problem. 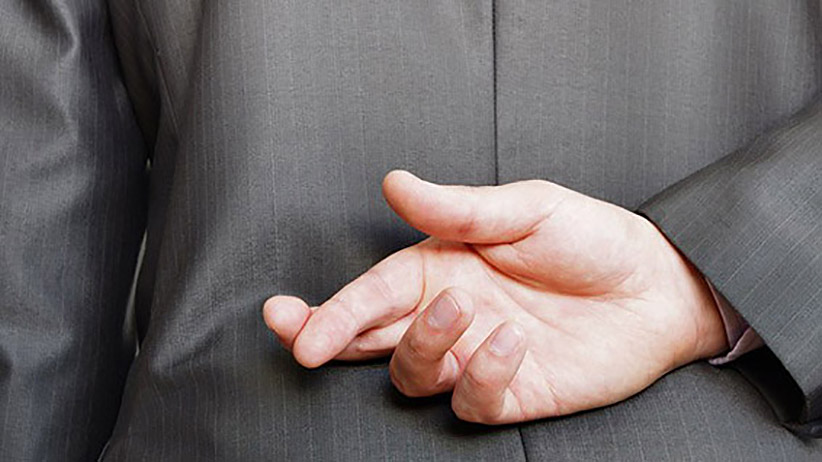 This is a hard topic. It is a topic many of us have heard of or even read about. In fact, based on my initial research, many more have experienced this than I ever could have imagined, and yet, almost no one talks about it.

Whether it's an investor who gives a startup a term sheet with no capital behind him, or an entrepreneur who builds a team, signs contracts and sometimes raises millions of dollars with nothing but air, this is something we are sadly seeing more of in recent years. It is not new; we have seen it before, but now, we are seeing a whole lot more of it. I am talking about startups and lying.

It has now happened to me, at different levels, at least five times in the past decade. Someone made up elaborate details regarding his position as an engineer at Apple, only to discover later that he lied not only to me, but to his family; his wife, his parents -- they all thought he worked at Apple.

Another example: An entrepreneur who came up with what was objectively a brilliant idea, then went and recruited 50 people who left top positions to join the company. He signed contracts with municipalities across the U.S all based on the lie that he had money in the bank and a product that worked. He did not and it did not. Everyone was out of a job and his lies induced losses of millions. People put their life savings into this venture.

Based on my casual tweeting and a Facebook post on the topic, this is a much more serious and widespread epidemic than I was aware. My inbox is filled with stories of entrepreneurs who had term sheets from investors that simply had no capital, with PR agencies that had absolutely no resources or abilities to deliver on their promises, and yes, with startups that 100 percent fabricated numbers in order to close an investment. I am not talking massaging numbers, people do that; I am talking blatant, baseless lies.

Every time I have personally encountered a person like this, I found myself trembling. It is hard to believe it until it happens. Why would someone do this, often for no monetary gain? Don’t they know they will get caught? What do they hope to accomplish? Nothing. That is the point. This is a real sickness we are talking about, and when society worships respect and prestige, these folks come out of the woodwork and do anything to obtain that respect. That is all this is; a sickness and a yearning to validate one’s self worth.

So, how do you recognize these people before they strike? Here are some patterns that I found spanned across all my experiences with these people.

This is the first sign. You know, the entrepreneur or investor who spends the whole meeting talking about himself and his astronomical accomplishments. I am not talking about the standard response to the first question everyone asks, “So tell me about yourself.” I am talking about literally every question you ask, whether about the product, the traction or the ability to deliver, getting a response similar to “I am awesome.” Look out for those guys. Rockstars almost never called themselves rockstars. If this person spends all day, every day convincing you of his awesomeness, he is trying to compensate for something; usually it’s the lack of anything substantial. He can’t “walk the walk,” so all he is left with is the ability to “talk the talk.”

Of course not every good salesman is a con artist, but if the person is always selling, just make sure whatever decision you make, it is you making it, not that person. Because the type that pulls off the scams I mentioned above? Their selling abilities are the core of their operation. It is everything they have and everything they depend on. If you stop and listen to what comes out of his mouth and it is always, 100 percent of the time, him selling, there is something wrong.

We all name drop -- it is how we validate ourselves in that initial meeting. I am not referring to the guy who drops names and praises those names. I am talking about the guy who obsessively name drops just for the purpose of letting you know that he apparently knows that person. Nine times out of 10, he does not. That is an easy way to verify your suspicions. Pick up the phone and ask about the nature of the relationship that was presented to you as if they are best friends.

If you have your suspicions about someone and that first paycheck is delayed with some lame excuse, again, nine times out of 10, that money will never show up in your account. Again, companies sometimes struggle with cash flow -- this is not that. I am talking about you hearing all about how much money the company has, day in and day out, but when push comes to shove, you never see one dollar change hands.

The primary problem with this type of person is that their lies run so deep, they actually often believe them. Stop and think about their explanation regarding why you can’t see the product yet, or why your paycheck is late, or why team members keep disappearing, or any other irregular patterns within the organization. Ask and listen. If the answer is not logical, which in these instances, they are often not, take a step back and do your research.

Those are just a few red flags to look out for. If you think something is wrong or something is off, step back and speak to others, because they might share your suspicions and they might have some info you do not.

If you do reach the painful conclusion that this is indeed a scam, confronting the person scamming you is ok; trying to reason with them is absolutely pointless. These people don't think logically. You corner them and they might call you names, or worse, threaten to fire or even shame you. Remember, their sole goal is to avoid getting caught.

And one more thing: If you do reach the conclusion that you are being scammed, don’t convince yourself that the dude has been lying to you all along but really, he will pay you. He won’t. Walk away and reevaluate your next moves.