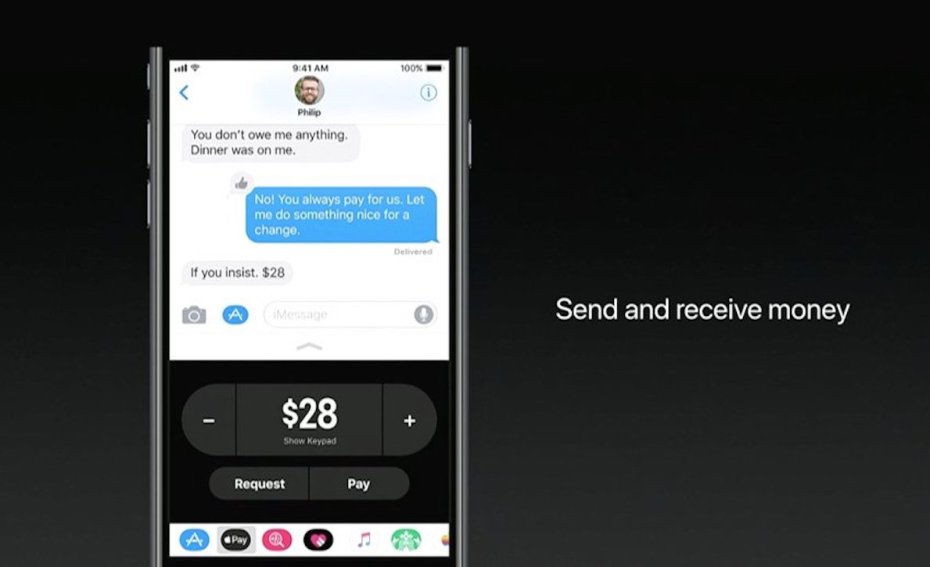 Apple is adding person-to-person payments to Apple Pay and integrating the technology into Messages, the company announced today at its Worldwide Developers Conference in San Jose, California.

Venmo first popularized P2P payments, which became a feature of PayPal when it bought the company in 2013. Square added the feature through Square Cash, while other apps like Circle and Snapcash embraced the feature. Apple has been slow to bring P2P payments to Apple Pay, despite the 375 million users who have access to the app.

That will change with iOS 11. Apple is introducing the P2P payments feature into iMessage, so users can more easily send money to friends they are messaging with. During a chat, for example, machine learning technology will detect a mention of payments and include an Apple Pay button on the keyboard.

Apple also announced Apple Pay Cash, its own digital debit card that lets recipients of P2P payments transfer the cash to a bank account or spend it at ecommerce sites and physical retail stores.

Despite its late entry into P2P payments, Apple now poses a real threat to PayPal’s Venmo, Square, and others. Apple Pay is huge: Craig Federighi, Apple’s senior vice president of software engineering, said that half of U.S. retailers will offer Apple Pay by the end of the year.

Share prices of Square and PayPal were up on the day, but had declined from session highs after Apple made the announcement.