Building a successful exit strategy in SEA; why pre-revenue models are bad for listings

An IPO or M&A deal is massive undertaking for any company; it is essential to be well-prepared 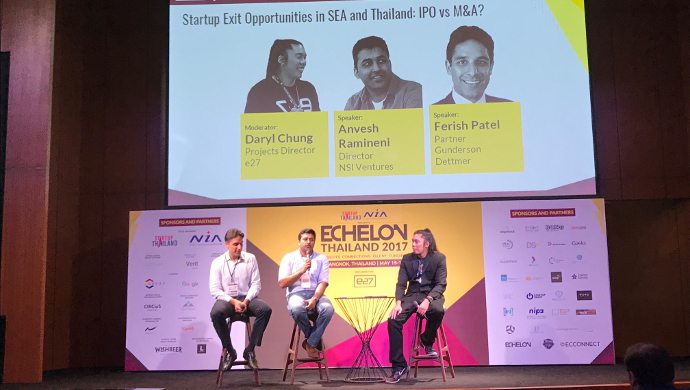 Going public or getting acquired is a complex undertaking for startup founders. An exit can give credibility to a company’s business, expose them to a broader investor market, and in turn, inject additional funding. On the other hand, an exit can also portend bad omens if the company is desperate to sell or raise funding.

Either way, exits are a major milestone for companies. At an Echelon Thailand 2017 fireside chat moderated by e27‘s Project Director Daryl Chung, NSI Ventures’ Director Anvesh Ramineni, and Ferish Patel, Partner at Gunderson Dettmer, spoke at length on the state of exits in Southeast Asia and how startups should prepare themselves for a successful exit.

Here are some key takeaways from the discussion:

The gestation cycle for a company working towards an exit is longer in Southeast Asia compared to Western markets, where the VC industry is more developed.

VC investments to GDP in Southeast Asia accounts for just 0.06 per cent, compared to 0.4 to 0.5 per cent in the West.

But gestation cycles may be reduced in the future due to the increasing influx of VC investments in Southeast Asia.

On the M&A side, deals were down in 2016 from 2015. But on the other hand, the amount spent on M&A deals were higher in 2016, for example, Alibaba acquisition of Lazada for a whopping US$1 billion.

This trend bodes well for Southeast Asia as more big, foreign companies are taking a serious interest in regional companies. A flourishing M&A also increases the confidence of investors and founders.

ASX is the stock exchange of choice

Many earlier stage companies look to the ASX for exits. Its listing requirements are more relaxed and there are a lot of sophisticated investors who understand tech. ASX is, however, seeking to limit access to low-revenue companies, so some tech companies may have to list elsewhere, such as the Hong Kong stock exchange and Taiwan stock exchange.

ASX is, however, seeking to limit access to low-revenue companies, so some tech companies may have to list elsewhere, such as the Hong Kong stock exchange and Taiwan stock exchange.

And while ASX may be perceived as the land of milk and honey for tech startups, the reality is less rosy. Many companies are actually underperforming; not all of them are at scale when they list.

A lot of them are looking to capital markets to raise small amounts of money, for example, US$5 million to US$12 million. That doesn’t give institutional investors, who typically invest in billions of dollars, enough liquidity options.

That said, there are also many successful listings on the ASX, some through backdoor listings, such as with the case of Singapore’s Dropsuite.

Preparing your company for an IPO

For an IPO route, companies should ensure their business is as healthy as possible. Start looking at analogous companies, study their financial metrics and performance in their respective markets. That way, founders have a benchmark for their IPO.

Companies need to achieve meaningful scale before looking at capital markets. If a company is looking to raise onlu small amount of capital, say US$5 million to US$20 million, it sends wrong a signal to the market that it is not at scale, and will, in turn, attract the wrong kinds of investors.

Being cashflow positive is also another critical factor. Companies who generate enough internal pools of cash to fund their business are telling the markets that they are in the pink of health.

Additionally, different stock exchanges have different regulatory requirements. Some lean to scale; others lean towards profitability. So founders need to examine which ones best suit their company’s business model.

Pre-revenue models are a red flag

If the company is still at a pre-revenue stage, listing is generally an unwise move to make, even if it is limiting itself to only accredited investors.

The reason being is that there is going to be a lot of reporting requirements and regulatory requirements to meet and conform to on annually — and that is going to take up a lot of time. A company at pre-revenue stage should be focussed on growth and not be bogged down by extraneous matters such as legal work and other regulatory hurdles.

Then, there is also the high fees associated with listings. So a combination of fees and regulatory hurdles to juggle is a no-no for a company still trying to find its feet.

Companies need to be at a point when they can sustain high growth and revenue generation before they list. Some companies that went public last year did not perform well because market expectations and reality on the ground did not align. Investors want to see sustained growth, not sluggish forecasts (duh).

That said, going public has one strong advantage for early-stage companies: it gives them acquisition currency. Companies do not need to spend money to acquire companies. And since growth does not necessarily have to be organic, companies can acquire companies to show inorganic growth to investors.

On acquihire deals, companies need to formulate a thorough and thoughtful post-acquisition plan. This is important as companies could potentially fall apart from management differences.

At Facebook, there are teams specialising in post-merger acquisitions. They help to make sure employees of both companies can jell and integrate with each other.

At the end of the day, what exit strategies a founder chooses is dependent on their goals.

Some founders prefer an option that allows them to retain maximum flexibility and strategic control so that they can continue developing their vision. Others may just be looking to cash out.

Why You Shouldn't Be an Entrepreneur

How To Make People Like You In 5 Seconds Or Less

7 tips for timid entrepreneurs to succeed at networking events

4 Ways to Improve Your Marketing Agency