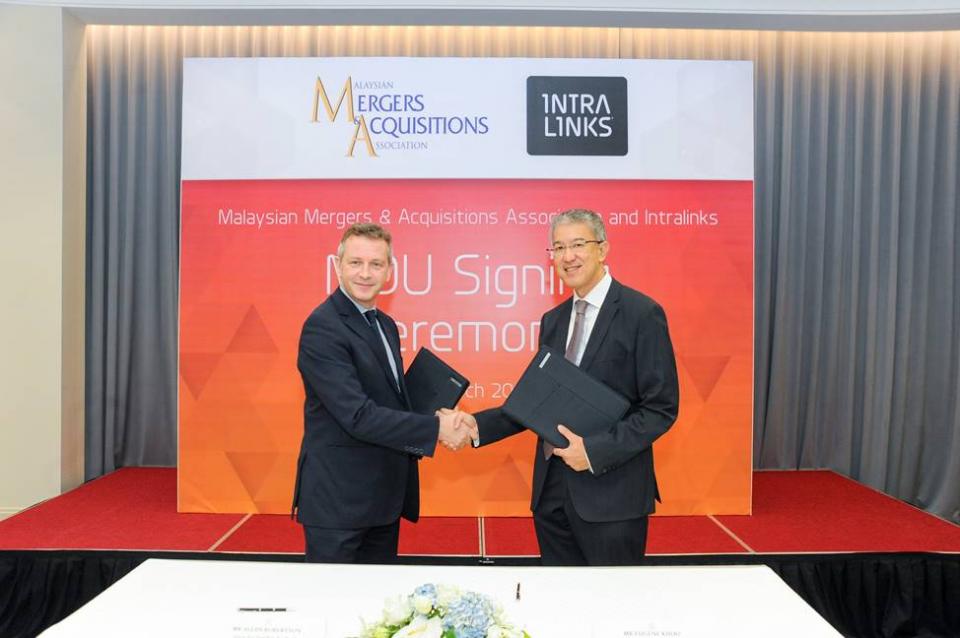 INTRALINKS, a global SaaS (Software as a Service) provider of content management and collaboration solutions recently announced the signing of a collaboration agreement with the Malaysian Mergers & Acquisitions Association (MMAA) to collaborate and promote best mergers & acquisitions (M&A) practices and technology in Malaysia.

Commenting on the significance of the partnership, Intralinks, Inc APAC senior vice president Allan Robertson says, “Malaysia is one of the most vibrant economies in South East Asia and it is expected to achieve a growth rate of 4% to 5% this year according to the 2016/2017 Economic Report by the Finance Ministry.

“Our recently published Deal Flow Predictor (DFP) report, which is an accurate forecast of M&A announcements globally, indicated that APAC was the top performing region in early-stage M&A activity in Q4 2016, with Southeast Asia and Australia contributing strongly to this growth. It is therefore timely that Intralinks and MMAA have entered into this agreement, opening more doors to share M&A best practices.”

Under the agreement, MMAA members will be able to leverage on Intralinks Dealnexus, which is the world’s largest deal platform for connecting buy-side and sell-side dealmakers.

Akin to a deal matching site for the M&A community, Intralinks Dealnexus brings together strategic buyers and sellers in a secure community that helps them target the widest possible market, significantly reducing the time and cost needed to find and close deals.

Intralinks will also share with MMAA members its DFP reports which contains extensive research and knowledge about the M&A trends in APAC.

Intralinks, in collaboration with MMAA will also conduct a series of seminars and workshops, one of which will be on Masters of the Deal, a collaborative research report of Intralinks and Cass Business School, London.

This 20-year study looks into the top performing global companies which have successfully generated shareholder value through M&A. The research analysed the performance of 25,000 global public companies, of which 18,000 were actively engaged in M&A, and 265,000 deals.

Speaking at the signing ceremony, group CEO TAHPS Group and MMAA president Eugene Khoo says, “The execution of this agreement with Intralinks will intensify collaboration and contributions to the M&A industry in Malaysia, as we co-create materials and benchmark practices in the M&A space, especially regarding the use of the latest M&A technology, which is crucial to ensuring security and trust throughout the due diligence and deal making processes.”

Marc Andreessen: “Take the Ego out of Ideas”

6 Ways to Stay Awake, Energized and Focused While at Work (Without Caf...