Dropbox finishes up 36% on first day of trading

Dropbox was off to the races on its first day as a public company. 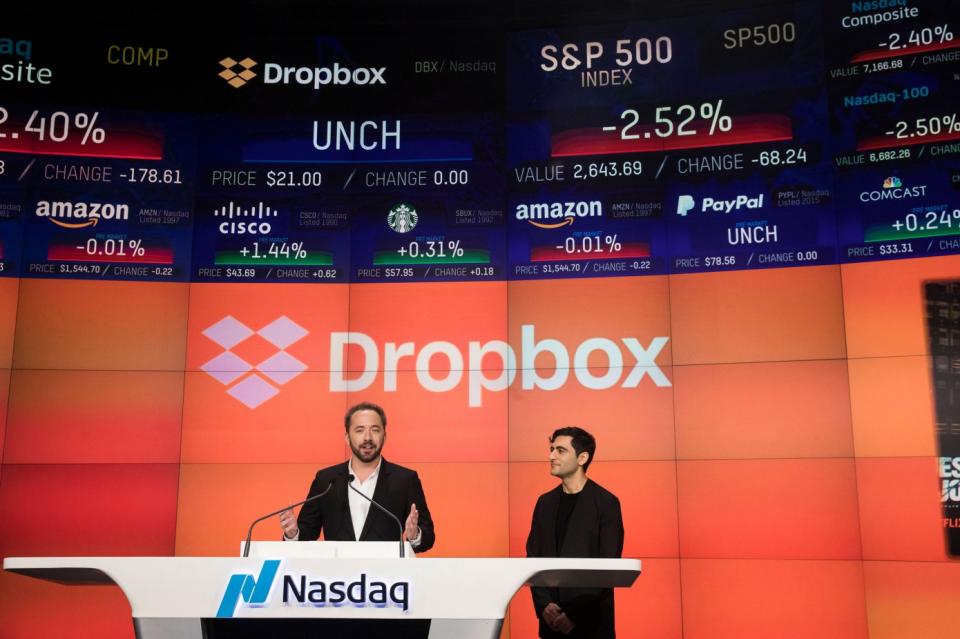 It’s surely a sign of public investor enthusiasm for the cloud storage business, which had initially hoped to price its IPO between $16 and $18, then raised it from $18 to $20.

It also means that Dropbox closed well above the $10 billion it was valued at its last private round. Its market cap is now above $12 billion, fully diluted.

While it’s been cash flow positive since 2016, it is not yet profitable, having lost nearly $112 million last year. But it has significantly improved margins when compared to losses of $210 million for 2016 and $326 million for 2015.

There has been a debate about whether to value Dropbox, which has a freemium model, as a consumer company or an enterprise business. It has convinced just 11 million of its 500 million registered customers to pay for its services.

Dropbox “combines the scale and virality of a consumer company with the recurring revenue of a software company,” said Bryan Schreier, a partner at Sequoia Capital and board member at the company. He said that now was the time for Dropbox to list because “the business had reached a level of scale and also cash flow that warranted a public debut.”

He also talked about the early days of Dropbox pitching at a TechCrunch event in 2008 and how disappointed they were that the slides stopped working during the presentation. We have footage of that here.

Sequoia Capital owned 23.2 percent of the overall shares outstanding at the time of the IPO. They shared Dropbox’s original seed pitch from 2007.

Accel was the next largest shareholder, owning 5 percent overall. Sameer Gandhi made the investment at Sequoia and then invested in Dropbox again when he went over to Accel.

Founder and CEO Drew Houston owned 25.3 percent of the company.

Greylock Partners also had a small stake. John Lilly, a general partner there, said he “invested in Dropbox because Drew and the team had an exceptionally clear vision of what the future of work would look like and built a product that would meet the demands of the modern workforce.”

But there are quite a few other businesses with similar products to Dropbox. The prospectus warned of the competitive landscape.

“The market for content collaboration platforms is competitive and rapidly changing. Certain features of our platform compete in the cloud storage market with products offered by Amazon, Apple, Google, and Microsoft, and in the content collaboration market with products offered by Atlassian, Google, and Microsoft. We compete with Box on a more limited basis in the cloud storage market for deployments by large enterprises.”

Note that it downplayed its competition with Box, a company that’s often mentioned in the same sentence as Dropbox. While the products are similar, the two have different business models and Dropbox was hoping that this would be respected with a better revenue multiple. If the first day is any indication, it looks like that strategy worked.

The company listed on the Nasdaq, under the ticker “DBX.”

Author Info:
This article was first published by Katie Roof on TechCrunch