Master the amazing power of the long game. 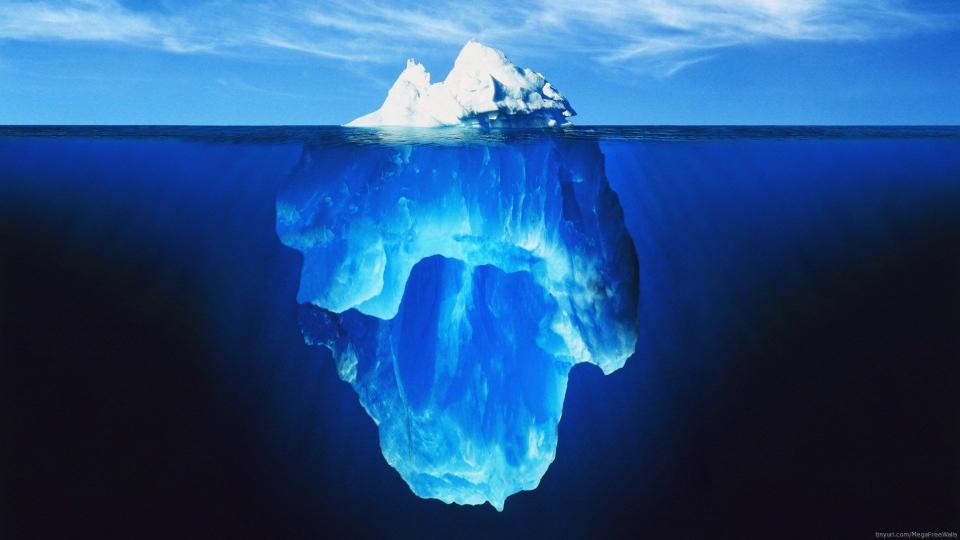 They somehow came out of nowhere, didn’t they? It was the right place at the right time, a matter of luck, a brilliant stroke of serendipity. Whether it’s an athlete taking the world by storm or the latest hit smash hit single, the myth of the overnight success lies rampant in our culture. You can thank our instant gratification culture for this phenomenon. We’ve fallen in love with the overnight success, creating impossible pressure on ourselves, leading to endless frustration and the comparison game.

I’m here to let you know there’s another way, a deeper story that can empower you. Once we examine these successes, it becomes clear that the imagined straight line to success is a facade and this is great news for you.

I’ve always loved Icebergs, dating back to high school when I didn’t pay attention in Earth Science class. They were just so massive in size and scope, yet you could only see a fraction of them above water. Only 1/8th of these monumental forces of nature are above water, yet the force below stretches miles. And hence, this metaphor: the foundation is deep underwater, a dormant, unmovable, and unseen force. Success, once examined deeply, is the same. Think of the visible part of the Iceberg as one person’s external signs of success: singing the tune on stage, publishing a bestselling book, landing their biggest acting role yet. Yet below this visible part lies another story, which almost always includes:

Years of failures, challenges, obstacles, doubts, intense focus, practicing mastery, showing up to do the work day in and day out.

In Steve Martin’s brilliant book, Born Standing Up: A Comic’s Life, he explains:

Which brings us to our first element of an overnight success: perseverance.

The Drive to Keep Going When Nothing’s Working

I remember being a kid and going to Warped Tour every single year, my version of the ideal Summer Vacation. Don’t ask me how 95-degree heat, a bunch of teenage kids and terrible acoustics was my dream, but it was a ton of fun. A small, unknown band was there playing their hearts out to 150 kids on a tiny side stage, and they were called Fall Out Boy.

Their energy was palpable, even if they hardly knew how to play their instruments. Four years later, after slugging around touring in vans, sleeping on floors, perfecting their craft is when the hit “Sugar, We’re Going Down” was released and everything changed, seemingly overnight. What they had was perseverance, the first trait I noticed among everyone I studied. Perseverance is a great element of success. If you knock long enough and loud enough at the gate, you are sure to wake someone up. Perseverance is the continued action taken in the face of adversity.

Fall in Love with the Long Game

The Internet and social media have made creating an app and selling it for millions—or a billion, like Instagram—the new American dream.

This type of pressure leads people to scramble and hop from one startup to another, in hopes of hitting it big, yet never truly following through to completion. I’ve never played Angry Birds, yet this game is showing up everywhere. It dawned on me the other day when I was looking for a movie to watch and I asked myself in disbelief, “There’s an Angry Birds movie?” I was stunned, but once I examined Rovio, the company behind Angry Birds, I learned the power of the long game.

There’s a part of success that innately rewards those who play the long game, instead of the dabblers looking to get in and out.

Singles Aren’t Sexy, but They Sure Add Up

If you’ve ever been to a ballgame where a grand slam happened, you know what that’s like. There’s nothing more crowd-roaring, exhilarating and powerful than a grand slam in baseball.

Yet would you want to be known only as a grand slam hitter, and more importantly, do grand slams help you win? Among all teams, the average for a grand slam comes down to about 1 every 1,300 at bats. Yet the quiet player who goes 2 for 4 with a couple singles and drives in some runs consistently is the real winner.

Consistent singles lead to players on base, which lead to runs and many more wins. Because, as we know, the grand slam slugger is going to strike out, and strikeout hard — time and time again. What I’ve noticed from studying overnight successes is they are committed to consistency as well as the concept of Kaizen, daily singles that lead to major wins.

Next time you see someone make it out of nowhere, do yourself a favor and dig deep into their story.

More often than not, you’ll find components of the above which you can use to fuel your own story and passion for what you’re striving for. Using perseverance, the long game approach and hitting singles, you’ll rack up momentum and set yourself up for achieving your wildest dreams.

Author Info:
This article was first published by Tommy Baker on Influencive