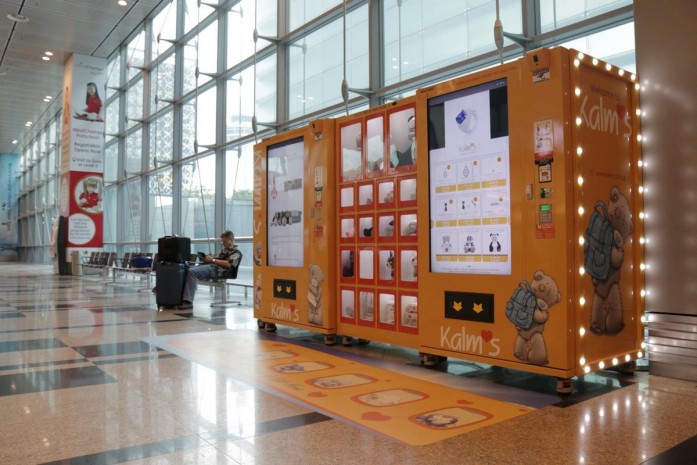 With sales stagnating and high rent and manpower costs eating away at his profits, Azan Tengku, the director of Singaporean gift company Kalms, decided to close down his stores and move all his products into vending machines.

Kalms, which has rolled out 50 machines island-wide that sell mostly teddy bears and jewelry, is one of a growing number of companies in the city-state adopting vending machines in a move encouraged by a government push for automation and tighter restrictions on low-skilled foreign workers.

The city-state is seeing some of the fastest growth rates in vending machines sales worldwide, even as there are signs of saturation in major markets like Japan, which at 5.5 million has the world's highest number of vending machines per capita.

"Rent is high in Singapore and good retail employees are hard to find," said Tengku.

"Singapore and Japan face the same challenges when it comes to employment and how both countries are densely populated and have space limitations."

Since the launch of its first vending machine in late 2016, Kalms says it has recorded month-on-month growth of 15 per cent for 16 consecutive months.

The firm is now partnering with other companies to sell food, clothing and electronic products on its machines, which it says will allow it to roll out hundreds more across the island-state in the coming year.

Businesses that manufacture vending machines in Singapore, like Le Tach, are also profiting from the trend.

Le Tach's co-founder Steve Chia said the company has grown from manufacturing 50 vending machines in 2011 to over 1,000 to date, adding that the types of vending machines have also expanded from dispensing drinks and snacks to selling daily essentials and accessories.

Singapore recorded $67.2 million in vending machine sales in 2017, data from research firm Euromonitor International showed, a 3 per cent increase from the previous year, and sales are expected to exceed $72 million by 2020.

While the island-state of around 5.6 million people only just sneaks into the top 30 countries in terms of vending machine sales, it is one of the fastest growing markets behind Russia (12.3 per cent), China (11.5 per cent), Thailand (8.5 per cent) and the United Arab Emirates (3.3 per cent).

Meanwhile Euromonitor's data, collected through interviews with trade bodies and firms, shows major markets like Japan are in decline because of increased competition and price-sensitive customers.

In Singapore, the government has been encouraging firms across industries to adopt more manpower-lean formats, alongside moves to ease their reliance on low-skilled foreign workers and ensure more access to jobs for locals.

As well as a multi-million dollar National Robotics Programme, one such initiative has been targeted at trying to promote technology in the food service industry through grants and consultancy services.

With the help of this scheme, food caterer JR Group has grown from one vending machine to over 100 in the last decade, and now has unmanned 24-hour cafes selling hot local dishes as well as Western, Indian, Korean and Japanese cuisine all out of machines.

"We wanted to find solutions and new ways to help us efficiently push out our products, and at the same time, pass these savings down to our consumers," JR Group CEO Jocelyn Chng said.

Other unusual items that can be found on sale in Singapore vending machines are insect repellent, fresh flowers, health supplements and ceramic bowls and vases.

The trend toward robot sales may have its limits though.

Some of Kalms' competitors in the gift and souvenir industry say the model only really works for emergency purchases and do not cater to casual shoppers or the millions of tourists who flock to Singapore every year.

Susan Tay, director at educational toy firm The Better Toy Store, said her products require more explanation to customers and human interaction that is lost in the world of robot sales.

"Automated machines may be a boon for retailers who just want sales, but may be a bane for responsible retailers who need to match the product to (consumer) needs," said Tay.

Author Info:
This article was first published on AsiaOne