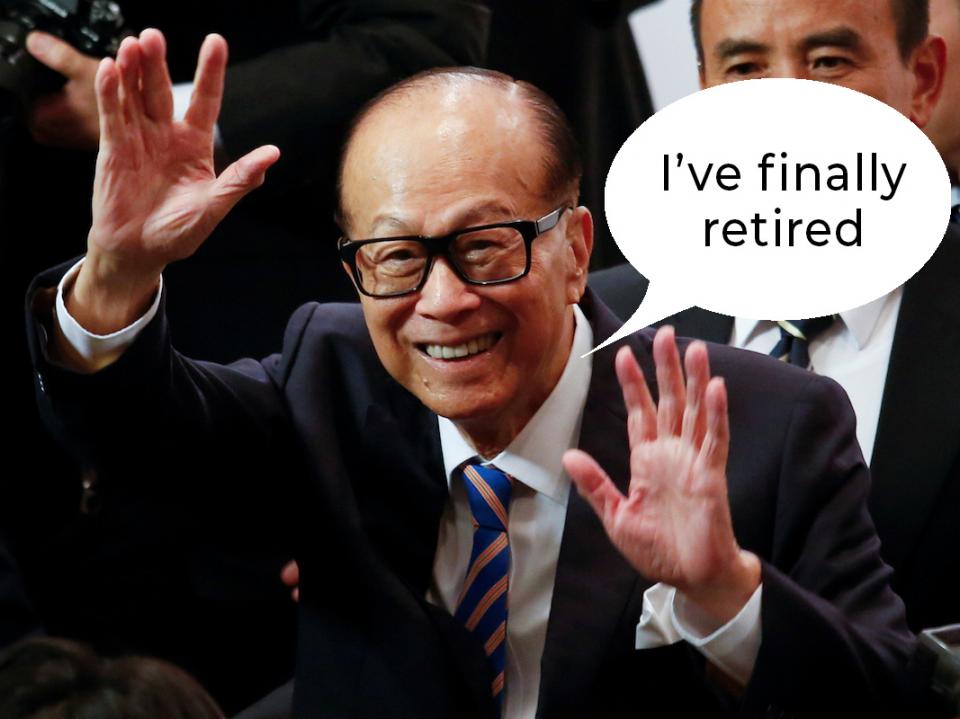 Often called “Superman,” he has an incredible “rags-to-riches” story that saw him go from impoverished in southern China to building a conglomerate that spans across 50 countries and 323,000 employees.

Hong Kong billionaire Li Ka-shing announced on Friday that he would be retiring from running CK Hutchison Holdings and CK Asset Holdings, the two massive conglomerates that he built in Asia’s most famous rags-to-riches story.

While he is no longer the richest man in Asia, the 89-year-old still ranks as the 23rd richest person in the world with a current estimated net worth of $35.4 billion.

Li is retiring weeks shy of his 90th birthday, but it is unlikely that the famously active mogul will rest for long. He has said he plans to work on his charitable foundation, the Li Ka Shing Foundation, and has pledged one third of his wealth to philanthropy.

His 53-year-old son, Victor Li, will take over the conglomerate, which has 323,000 employees, operations in 50 countries, and investments ranging from property and technology to energy.

Often called “Superman” and Asia’s answer to Warren Buffet by the media, Li has an incredible and inspiring life story. He went from dropping out of school as a child to support his family to becoming the first person of Chinese origin to buy one of the British-built Hong Kong companies that dominated the city since its colonial days.

Li Ka-shing was saddled with financial responsibility from a young age. After his family fled to Hong Kong from southern China during WWII, his father died of tuberculosis. He had to leave school before the age of 16 to work in a plastics factory.

For almost four years during the Japanese occupation of Hong Kong, he sent 90% of his pay to his mother. Li worked hard from a young age, often working 16 hours a day, seven days a week, a pace that he says he continues to keep up even at 89 years old.

Li eventually became the factory’s top salesman and was promoted to be the factory manager at 18.

Li showed promise as a leader and visionary when he opened his first factory in 1950, at the age of 22. The factory, Cheung Kong Industries, manufactured all kinds of plastic, but was particularly popular for its plastic flowers. He anticipated that plastics would become a booming industry, and he was right.

A hotel owned by the modern Cheung Kong now stands on the same site.

Li attributes the success of Cheung Kong, which he started with only about $50,000, to a willingness to learn the latest industry trends. “The correlation between knowledge and business as the key to success is closer than ever,” he said.

Though Li dropped out of school at a young age and never received a university degree, he has always been a voracious reader and attributes much of his success to his ability to learn independently. For instance, he completed Cheung Kong’s accounting books in the company’s first year himself with no accounting experience — he simply taught himself from textbooks.

Along with knowledge and industry insight, Li considers loyalty and reputation to be keys to success. In a 2006 interview with Forbes, he said, “Anytime I say ‘yes’ to someone, it is a contract.”

In 1956, he once turned down an offer that would have given him an extra 30% profit on a sale (and allowed him to expand his factory) because he had already made a verbal agreement with another buyer. He still carries this principle of loyalty today, even when it means losing money.

Like many famous investors, Li often bought when others sold. When riots inspired by Mao Zedong’s Cultural Revolution broke out in Hong Kong in 1967, Li invested in the city’s property as prices tanked.

Li scored a major victory in 1979 when he bought control of Hutchison Whampoa from the bank HSBC Holdings. Li negotiated to buy Hutchison shares for less than half of their value and, in doing so, became the first person of Chinese origin to own one of the British-controlled companies that dominated Hong Kong since the 1800s.

Though he is known mainly as a property developer, Li’s companies control 70% of port traffic and most electric utilities and telecommunications in Hong Kong. He also owns a majority stake in Husky Energy, a Canadian company. Li distributes his wealth and power across different industries and geographic areas, showing that he is unafraid to learn and experiment in new arenas.

Li enjoys spending his “mad money” on these investments rather than on material things. He consciously makes an effort to be perceived as materially modest. He wore a $50 Citizen electric wristwatch for years before moving to an equally cheap Seiko. In recent years, he upgraded to a $400 Citizen Eco Watch due to its battery life and durability.

Li suffered a personal tragedy when his wife, Chong Yuet-ming, died of an aneurism at the age of 55 on January 1, 1990.

One of Li’s biggest successes came in 1999 when he sold mobile phone company Orange to German conglomerate Mannesmann AG for a $15 billion profit.

Though he has many holdings, the thriftiness that was necessary during Li’s childhood has carried over into his current career. His no-debt policy means that his companies operate using as little debt as possible, and Li himself purchases all of his real estate using capital, in order to maintain zero personal debt.

Li’s good financial habits have given him the freedom to treat investment in technology as a “high-stakes hobby,” through Horizons Ventures Ltd. His longtime friend, Solina Chau, runs the tech fund.

But Li isn’t entirely frugal. He owns a palatial residence in Hong Kong’s Deep Water Bay — where even a four-bedroom family house can set you back £13 million.

Li was one of the first big investors in Facebook and Spotify and more recently invested in a startup that aims to replace eggs with a plant substitute. Li only invests in technology that he sees as “disruptive” and will make his holdings more cutting-edge. This is consistent with his constant innovation in his businesses.

Perhaps one of the most important factors that has contributed to Li’s success is the passion he feels for his work. In 2010, he told Forbes, “The most important enjoyment for me is to work hard and make more profit.”

In 2012, Li announced that he would hand off Cheung Kong to his eldest son Victor Li, while providing cash to help his second son Richard develop his own businesses. He did not announce when he would retire, though.

It hasn’t all been smooth sailing for Li’s company. It was embroiled in a dock strike in 2013 and has been vilified by unions. In this picture, the characters on this protester’s mask mean “monster” or “evil.”

But on Friday, Li announced that he would be retiring to focus on his charitable foundation, which he has called his “third son.” He has said that he hopes that as Asia becomes more wealthy, others will follow his lead in philanthropy. He has pledged to give away one-third of his $35.4 billion fortune.

Author Info:
This article was first published by Harrison Jacobs on Business Insider US

China Is Stepping Up Its Efforts To Draw Tech Giants Like Alibaba And ...