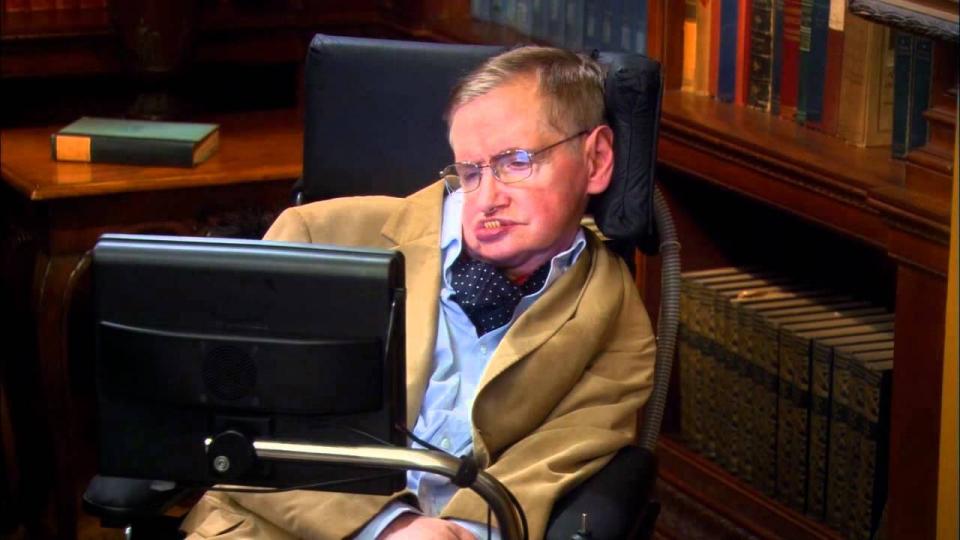 British physicist Stephen Hawking has died at the age of 76, but he's left a lasting legacy behind.

From his book A Brief History of Time to appearing on television shows, the scientist has made science accessible - and interesting - for the masses.

But what do we know of his life? We take a look at the man, his marriage, how he talked with his synthesizer and his views on black holes, religion and what he wanted on his tombstone.

While Hawking tried to solve the mysteries of the universe, the man himself was quite happy to share his life.

Here are some facts about Stephen Hawking.

Born in Oxford on January 8 1942 - 300 years after the death of astronomer Galileo Galilei - Professor Hawking grew up in St Albans, Hertfordshire. His parents thought it was safer than London.

2. When was he diagnosed?

After falling while ice skating during his first year as a grad student he was told he had a rare form of motor neurone disease - amyotrophic lateral sclerosis (ALS) - at the age of 22.

Hawking was given just a few years to live. It's unusual to be diagnosed so early, but he later said it meant he had to think.

"By losing the finer dexterity of my hands, I was forced to travel through the universe in my mind and try to visualize the ways in which it worked," he later said.

3. He's appeared in a lot of TV shows

Hawking is as much a celebrity as he is a scientist, having appeared on The Simpsons, Futurama, Star Trek and having provided narration for a British Telecom commercial that was later sampled on a Pink Floyd album. He first appeared as himself on TV in 1993 - in Star Trek: The Next Generation - making jokes while playing poker with Albert Einstein and Isaac Newton. He also appeared on The Big Bang Theory.

He's also starred in his own miniseries Stephen Hawking's Universe.

4. He was bullied at school - and wasn't actually top of the class

He had a difficult time at the local public school and was persecuted as a "swot" who was more interested in jazz, classical music and debating than sport and pop. Although not top of the class, he was good at maths and "chaotically enthusiastic in chemistry".

He went on to study physics as Maths wasn't available at the university he chose - he went to the same college as his father at Oxford.

Hawking has said of his workload as an undergraduate at Oxford "amounted to an average of just an hour a day".

He also said: "I'm not proud of this lack of work, I'm just describing my attitude at the time, which I shared with most of my fellow students. You were supposed to be brilliant without effort, or to accept your limitations and get a fourth class degree."

Despite his workload confession, Hawking got a first and went to Cambridge to begin work on his PhD - but he was already beginning to experience the first symptoms of his illness, having fallen over twice for no reason during the last year of his undergraduate degree.

Hawking has credited his marriage in 1965 to Jane Wilde, a language student, as a turning point in his life at a time when he was unsure as to what the point of a degree was if he was to die soon. They went on to have three children - Robert, Lucy, and Timothy.

8. He interrupted a lecture

At a meeting of the Royal Society meeting, Hawking interrupted a lecture by renowned astrophysicist Sir Fred Hoyle to let him know that he had made a mistake. When asked how he knew there had been an error, Hawking replied: "Because I've worked them out in my head."

9. His research on black holes

During the 1970s Hawking produced a stream of first class research, including probably his most important contribution to cosmology: the discovery of Hawking radiation, which allows a black hole to leak energy and gradually fade away to nothing.

10. A Brief History Of Time was a best selling book

In the 1980s, Professor Hawking and Professor Jim Hartle proposed a model of the universe which had no boundaries in space or time. The concept was described in A Brief History Of Time, which sold 25 million copies worldwide.

11. His second wife was his nurse

In February 1990 he left his wife of twenty five years to set up home with one of his nurses, Elaine Mason. The couple married in September 1995 but divorced in 2006.

12. He's predicted the end of humanity

Among some of his more unconventional theories, Professor Hawking has predicted the end of humanity - due to global warming, a new killer virus, or the impact of a large comet.

In 2009 he was awarded the Presidential Medal of Freedom, the highest civilian award in the United States. He was awarded an CBE in 1982 and the Companion of Honour in 1989.

He also was given many other awards, medals and prizes like Fundamental Physics prize (2013), Copley Medal (2006) and the Wolf Foundation prize (1988).

Hawking was the Lucasian Professor of Mathematics at the University of Cambridge for 30 years, taking up the post in 1979 and retiring on 1 October 2009.

He is also a Fellow of Gonville and Caius College, Cambridge having held many other academic positions.

14. His relationship with religion - was he an atheist?

In recent years, Professor Hawking has examined the relationship between science and religion, writing a 2010 book Grand Design, which argues that evoking God is not necessary to explain the origins of the universe. He has said he's an atheist, though he has caused confusion before by claiming the entire universe is God - he has expressed pantheistic views.

15. His life could be summed up in an equation

His formula involves the speed of light (c), Newton's constant (G) and other symbols that probably make no sense to you or me - it's used for measuring emissions from black holes, a formula known as Hawking radiation.

Hawking himself was puzzled at first as he thought black holes were celestial death traps that swallowed up energy. He then decided that it was possible because of the quantum theory, general relativity and thermodynamics - and brought it all together in one simple formula.

16. Hawking wanted his equation carved on his tombstone

He once said he wanted the Hawking Equation put on his gravestone when he died.

Hawking did almost die of pneumonia when he was travelling to Geneva. He was unconscious and hooked to a ventilator. His wife then had the decision of whether to remove the life support - but she rejected the idea.

He underwent a tracheotomy, to help him breathe, but it removed his ability to speak, which is why he had his famous speech synthesizer.

18. Who made his speech synthesizer?

It was made by a Calfornia-based company called Words Plus, which ran Equalizer on an Apple II computer.

The system was mounted on to the wheelchair so Hawking could 'speak' using a hand clicker to choose words on a screen.

When he was no longer able to use his hands Hawking used an infrared switch attached to his glasses that detects cheek movements.

The tech was overhauled by Intel, though he actually insisted he keep the robotic voice with the no-accent as he said it was part of his identity.

19. He wrote his book using the synthesizer

Hawking was convinced he could write a book about the mysteries of the universe that everyone would be able to understand.

When he lost the ability to write and speak the task proved harder, but he used his speech synthesizer with help from students who relayed his draft changes to his US editor by phone.

A Brief History of Time was the result. He went on to write many more books, even co-writing one with his daughter Lucy.

Author Info:
This article was first published by Jo-Anne Rowney on Mirror