Not only has Domino's managed to bring in more than 60% of its business through digital channels, it convinced a generation of pizza lovers – many of them so-called digital natives – that the company really does get them 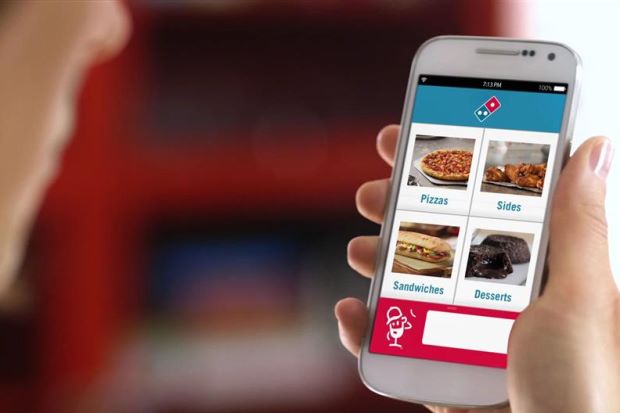 Domino's Pizza spent a good part of the last decade chasing what seemed like every digital doodad to deliver pizza – sometimes to the scorn of observers who pointed out that the business was, after all, popping topping-covered dough in an oven and delivering it.

Why, the sceptics asked, do you need a digital voice-recognition app on your phone to order a pizza, when you can just call and speak to an actual person?

But now, as Domino's claims the title of largest pizza chain by global revenue – edging out its longtime rival Pizza Hut – the Ann Arbor, Michigan-based company's relentless pursuit of digital technology appears to be quite prescient.

And it's working on automated pizza delivery with drones and driverless cars.

“We used to be a pizza company that sells online and we needed to become an e-commerce company that sells pizza,” Dennis Maloney, Domino's chief digital officer, said last recently in an interview. “That was one of the big aha moments that caused a lot of conversation within the company.”

One question that retail analysts are asking, though, is whether this is part of an effort to eliminate jobs.

Among the company's innovations:

– An app to track a pizza is while en route to you.

– The ability to order on just about any digital device and platform.

Not only has Domino's managed to bring in more than 60% of its business through digital channels, it convinced a generation of pizza lovers – many of them so-called digital natives – that the company really does get them.

“Oh totally!” said Laura Khalil, 37, of Detroit, who has used the iPhone app. “They understand people's desire to have things when they want it, how they want it – and get it through the channels they use. It's genius.”

Khalil – who said she loves Domino's pizza but is now trying to eat healthier – added the company caters to a quick fix.

“If I can just send a pizza emoji, I don't have to think a lot,” she said. “And their pizza is really good. I don't think any of this would work if their product was disgusting. What I love most about their app is it answered the No. 1 question I always had: Where is my pizza?”

A decade ago, Domino's started its digital transformation with its Pizza Tracker, a system to track pizzas on their way to their destination. Over the years, it rolled out all sorts of innovations.

At first, there was scepticism – and even some ridicule.

Some of it was even within the company.

“There was a lot of pushback across the board from a lot of folks,” Maloney said.

In 2013, Domino's put a camera in a kitchen and live-streamed it. It called the feature “Domino's Live.” It was not quite reality TV. There was just video, no audio, and it was only in one store in Salt Lake City. Domino's officials said they hoped the behind-the-scenes show would be entertaining to watch.

To many, it really wasn't.

But, the video made headlines and gave the company a chance to tout its commitment technology.

Then, the next year, Domino's created an app that let you order – and pay – from your Ford vehicle.

At the time, Domino's president and CEO said, it was “one of the coolest in a long list of recent technology innovations for Domino's,” and added that about 40% of its sales were generated by online orders.

He may have been exaggerating about it being cool.

But, again, it was an innovation that made headlines. By the end of the year, Domino's offered yet another technological advance: Dom, the company's Siri-like order-taking voice aimed at making online ordering a more conversational experience and putting the company in the company of tech innovators like Apple.

And again, not everyone was buying into the pizza company's tech revolution. Some even suggested it was a waste.

One customer took to YouTube to publicly criticise Dom.

“Are you serious?” the critic said after watching a Domino's commercial for the app. “Did Domino's reinvent the phone call? Voice ordering is called a phone call. All you have to do is pick up the phone, which you've got in your hand, push speed dial for Domino's – “Hey, I want a pizza. ... ”

He added: “I wonder how much money Domino's spent developing an app to voice order a pizza?”

Doubling down on digital

Domino's, however, kept investing in new ways to order pizzas online – and to appeal to customers who were eager to use digital technology. It also went a step further by trying to innovate delivery.

It also added a feature that let customers order via Twitter using a pizza emoji:

That led, in 2016, to the AnyWare campaign: Order from your phone by calling, texting, tweeting, using Facebook messenger; from your smartwatch; from your computer and tablet using the company website, Slack; from your car, from a button on your Samsung TV remote, and by using clicks, characters or voice commands to Dom, Alexa, Echo and Google Home.

But, the technology didn't always work.

Executives said the company was learning, improving – and using the innovation to not just sell pizzas, but also market the company to customers – and its investors – hungry for that kind of technology. Maloney called the tech "fantastic public relations stories" in a Wired magazine article.

By 2017, the company had enhanced its technology. It also began offering a pizza wedding registry – and even tried drone delivery in New Zealand, and driverless car deliveries in Ann Arbor, with future tests set in Florida's Miami-Dade County.

Domino's said it believes driverless-car delivery is “where the industry is going.”

Domino's began with one store in Ypsilanti, Michigan, in 1960.

Back then, it was called DomiNick's. Brothers Tom and James Monaghan bought it for US$500 (RM1,956) and later renamed it Domino's.

There are now more than 14,400 Domino's stores around the world.

J. Patrick Doyle, Domino's president and CEO, has said for years he wanted Domino's to be the top pizza company in the world; and a few weeks ago, finally met his goal, edging out Pizza Hut, which had been the largest chain with US$12.2bil (RM47.75bil) in global sales for 2017.

Doyle is stepping down in June. Richard Allison, president of Domino's International, is set to take over.

“It probably won't come as fast as everybody is saying, but faster than anybody believes,” Maloney said. “We are well past the conversation now if autonomous vehicles are coming. Now, it's a question of when and how.”

So far, he added, the company has learned that customers were open to the technology.

And other pizza companies are looking into driverless tech, too. Pizza Hut, Domino's Plano, Texas-based rival said it is working with Toyota to launch a fleet of delivery trucks, that in a rendering of the future vehicles, looks like a toaster on wheels.

Ken Nisch, chairman of the retail design firm JGA in Southfield, Michigan, points out that while Domino's technology tells a good story, it also, ultimately, may be aimed at reducing its future operating expenses by cutting labour costs.

The company – and others like it – are trying to build a runway to artificial intelligence and automation, he said. To do that, it has to get customers comfortable with technology and get the company ready for a digital interface instead of a human one.

“It takes the biggest variable out, which is labour,” he said.

Retailers, Nisch said, are moving in a direction that uses more voice recognition and activation that makes it easier for customers to make purchases and gives the company more information about the buyer.

He added that it looks like Domino's is putting their investment in technology.

In response, Domino's said that a high-tech future may mean fewer jobs to take phone orders or deliver pizza, but it also means more jobs in tech to keep the innovations – and orders – coming in, and the company's website promises that more technology is “coming soon.”

If only Dom could tell us what it is.