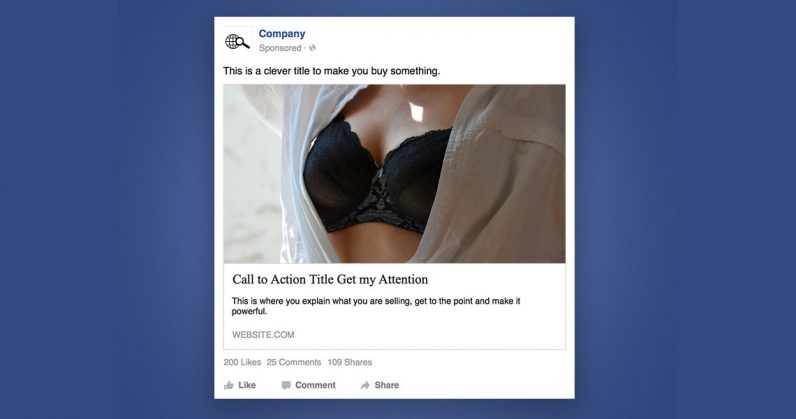 Facebook is again under fire over policies meant to curb adult content in ads. The company has recently faced scrutiny for scattershot enforcement of its own rules, seemingly penalizing women for showing skin that men get away with.

Several people reported that they’d had pictures taken down or rejected from ad campaigns for featuring female nudity, despite the fact that much more explicit photos of men have remained up.

Facebook doesn’t say why it prohibits cleavage, and it seems like nothing more than a low blow aimed at women. Infuriatingly, one picture shows a woman leaning forward slightly and looking into the camera. This image apparently “shows someone in a sexually suggestive pose.” Really, that’s apparently all it takes, even though she looks more like she’s modeling for hair conditioner.

It’s fairly common for women to be accused of being flirty in situations that, to their minds, are perfectly innocent. It’s the reason men like VP Mike Pence say they won’t be alone with a woman they aren’t married to under any circumstances, because no matter how professional or banal the setting, they seemingly believe women are seductive temptresses.

It’s reductive; it’s insulting; it’s not the least bit flattering; and the knowledge that our bodies are unwelcome or being watched is really damned uncomfortable. So when Facebook says a woman is sexually suggestive for possessing cleavage and a haughty stare, it doesn’t help one bit.

Recently, Facebook removed a picture of the curvaceous Venus of Willendorf statue, despite their ad policies explicitly making an exception for statues (but not other forms of art — Michelangelo’s canon must really confuse them). Facebook later reversed the decision, saying the ad the picture was in “should have been approved.”

On the flip side, when the NYT asked Facebook about a specific ad of a man’s rippling obliques posted on a romance novel page, a Facebook spokesperson said it shouldn’t have been approved. To reiterate, Facebook’s ad policy prohibits “Images focused on individual body parts, such as abs, buttocks or chest, even if not explicitly sexual in nature.”

So while Facebook might claim its policies are in place to prevent any inappropriate material getting through, it seems fairly obvious it’s more focused on women in ads over men.

Author Info:
This article was first published by Rachel Kaser on TheNextWeb