Meanwhile, other naming styles are getting more fashionable. Below, we take a look at what’s hot now and what might be in vogue next. 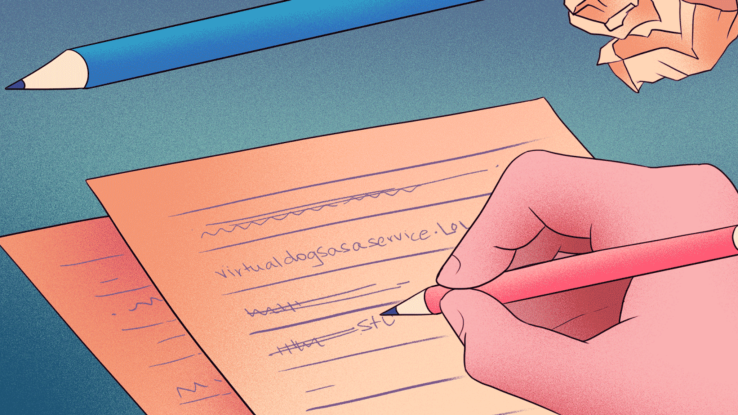 If the latest seed-funded startups have their way, this is what your future will look like.

You’ll find your mortgage through a company named Morty, refill your contact lenses with Waldo and get your cannabis news from Herb. (Which is not to be confused with Bud, the startup that handles your banking.)

Later, you can use Cake Technologies to pay the bar tab, cover fertility treatments with Carrot Fertility and get your workers’ compensation through Pie Insurance.

Afterward, rent your neighbor’s stuff with Fat Lama, manage your cloud services with LunchBadger and network your way to a better career with Purple Squirrel.

Notice any patterns here? Yes, first names, foods and animals have been quite popular lately with founders choosing startup names.

Those are a few of the top naming trends Crunchbase News identified in our latest perusal of seed-stage startups. The project involved parsing through names of more than 1,000 startups that raised seed rounds of $200,000 and up in the past nine months.

This data crunch was an update (see our methodology section below) to a prior overview of the often bizarre naming trends that startups follow. At that time, we found top trends included putting AI into your name, using popular first names and employing creative misspellings of common words.

Most of these things are still popular in startup naming, but some more than others. Adding AI at the end of a name, for instance, is still common, but seems to be waning some. Creative misspellings are still getting done, but less frequently.

Meanwhile, other naming styles are getting more fashionable. Below, we take a look at what’s hot now and what might be in vogue next.

The first-name trend seems to be intensifying, diversifying and creeping into more sectors. Last year, we started noticing a proliferation of chatbot startups using first names. More recently, the first-name trend has pervaded insurance, cannabis, fintech and a whole lot of other spaces.

First names that startups are using are getting nerdier and less common. Morty, for example, is commonly short for Mortimer, which peaked in popularity in the 1880s. It was most recently ranked No. 12,982 on the list of most common baby names. Then there’s Fritz, a learning software developer with a name that also hit its peak in the late 1800s. Last year it ranked No. 4,732.

Another mini-trend that we’d like to see expand is the use of startup names based on textures.

This is a stark contrast with the chatbot crowd. They tended to go with popular monikers, like Ava, Aiden and Riley, that rank high on the latest baby name lists. Some of the more offbeat names, however, do tie into their sectors. Herb has been used as slang for marijuana. Morty, for instance, shares a first syllable with mortgage.

It’s also noteworthy that many startups go with single-word names. This is a shift from the old school practice of combining a first name with another word, as in well-known brands like Trader Joe’s and Sam’s Club.

Startups also like naming themselves after foods lately. Of course, this isn’t an entirely new phenomenon, and it has worked well before. Apple named itself after a fruit and later became the world’s most valuable technology company.

It should be noted that the food names we refer to here are for companies that, like Apple, have nothing to do with the food industry. Carrot Fertility, which raised $3.6 million in seed funding last fall, for example, offers insurance policies for employers to help cover costs of workers’ fertility treatments. MoBagel is a data science startup. Parsley Health provides primary care. The list goes on.

One of the nice things about naming yourself after a food is that these are general purpose nouns that don’t seem to raise a lot of copyright issues. Vegetables and baked goods aren’t going to sue you for misappropriating their names.

Animal names are also good from a trademark perspective. Plus, with an animal name you can also create a cute logo featuring the creature.

Those may be some of the reasons why animal names are also in vogue lately with startups developing both consumer-facing and backend technologies. The formula is also pretty straightforward: pick an animal and then add another descriptive word.

There are plenty of textures out there that don’t have a funded startup associated with them, including spongy, slimy, gelatinous, puffy, gloppy, stringy, pasty, hairy and fluffy.

Of course, for most of the animal-monikered startups, mascots have nothing to do with the underlying businesses. MortgageHippo obviously doesn’t expect hippopotamuses to use its mortgage tool, and Purple Squirrel doesn’t cater to furry-tailed job seekers.

That said, we do worry about the animal kingdom theme getting a bit overused. For instance, MortgageHippo and Hippo Insurance were both funded in the past couple of years.

Other mini-trends we saw and liked

Another interesting trend is that many startups hopping on the fashionable name bandwagon are in the insurance sector. We’ve seen a huge spike in insurance startup funding over the past couple of years, with many upstarts looking to re-architect the industry to appeal to millennial consumers. They have names like Oscar, Lemonade and The Zebra.

Much of this activity is being bankrolled by the largest insurance companies, most of which are a century old and tend to have dull names that sound like, well, insurance companies. So don’t be surprised if the trendy new insurer is actually part-owned by the old boring one your parents complained about.

Another mini-trend that we’d like to see expand is the use of startup names based on textures. In the past year, both Fuzzy and Mush raised good-sized seed rounds.

It’s not too late to get in on this trend, either. An analysis of Crunchbase funding archives reveals there are plenty of textures out there that don’t have a funded startup associated with them, including spongy, slimy, gelatinous, puffy, gloppy, stringy, pasty, hairy and fluffy, to name a few.

We altered the methodology for this naming piece since the last one. Previously, we looked at startups based on founding date. This time, we looked based on closed seed rounds of $200,000 or more in the past year for companies founded in 2015 or later.

Author Info:
This article was first published by Joanna Glasner on TechCrunch