We visited each company’s flagship store on New York City’s Fifth Avenue to see which offered the better retail experience. 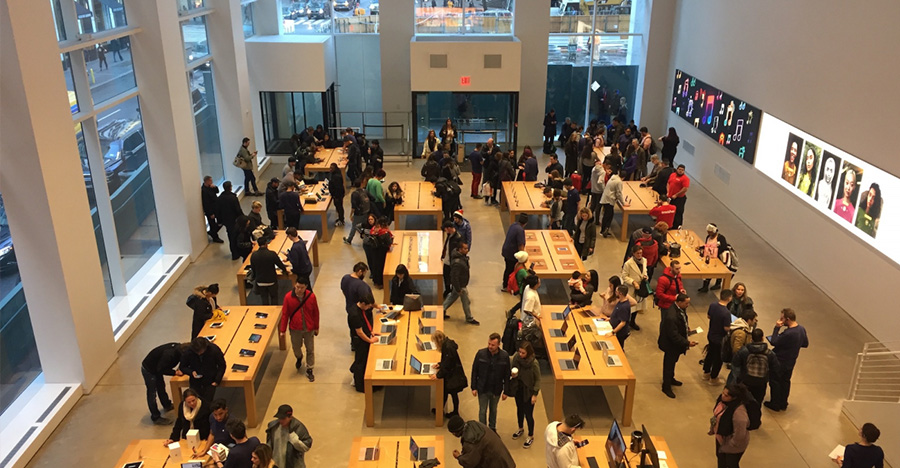 Apple keeps the retail experience simple by removing distractions and drawing your attention to opportunities to try its products.

Apple‘s and Microsoft‘s flagship New York City stores are less than half of a mile away from each other.

Apple’s design instincts and a product strategy that emphasizes items that look similar and are easy to use made for a better retail experience.

But Microsoft’s store had flashier products to try, including virtual-reality headsets.

Apple has been the gold standard for retail since it ignored conventional wisdom and opened its first store in 2001. Since then, other companies have tried to match its first-class customer service and design instincts.

While Microsoft made its fortune on software, including Windows and Office, its expansion into hardware products like the Xbox and Surface tablets and laptops made the idea of a retail store a more realistic possibility. The company opened its first in 2009.

I visited each company’s flagship store on New York City’s Fifth Avenue to see which offered the better retail experience.

Here’s what I saw.

I started at the Apple Store.

The usual location, beneath its signature glass cube, is being renovated, so the store has been temporarily moved to a building next to the construction area.

While the store’s exterior looked different, the company’s design principles and retail philosophy were intact inside.

While Apple has tweaked the stores since their debut in 2001, they continue to emphasize minimalism, encourage interaction with Apple products, and feature personable employees.

The store’s layout was even clearer from above.

The Fifth Avenue store prevented clutter by displaying a limited inventory and doing away with signs and price stickers. As a result, my focus was immediately directed toward trying the products.

Apple’s display strategy is similar to a luxury clothing or jewelry store.

It’s no coincidence Apple put its flagship New York City store near luxury brands like Cartier, Bergdorf Goodman, and Louis Vuitton. The store even had an employee dusting off the products.

The second floor showed off some recent tweaks.

When Angela Ahrendts became Apple’s senior vice president of retail and online stores in 2014, one of her priorities was improving the displays for complementary products like phone cases.

The cases caught my attention as soon as I arrived on the second floor. That the brightest cases were above eye level – so they would be visible even if people were standing in front of them – spoke to Apple’s attention to detail.

The store also did a good job of creating opportunities for customers to interact with complementary products.

On both floors, numerous people occupied many of the display tables.

It was difficult to find tables empty enough to get a clear view of the products.

Ahrendts also wanted Apple Stores to host classes where customers could learn how to use their products.

During my time at the store, I saw an Apple employee teaching a class about taking photos with iPhones. He used conversational language, an interactive display, and simple examples to make the lesson accessible for customers of all skill levels.

In my experience, Apple’s retail employees have always been exceptional.

I had an excellent experience at this store last year while having my laptop fixed, and over the years I’ve been impressed by how personable and attentive Apple employees tend to be – even when the store is packed.

I went to the Microsoft Store next.

While the product spacing and focus on interactivity reminded me of the Apple Store, there was a little too much sensory stimulation on the first floor. In addition to three large screens in the middle and on the sides of the room, I heard two songs playing at once. (This was most likely the result of a DJ program customers could demo.)

The store also took a similar approach to customer service.

On the second floor, customers could either seek help at a communal table that resembled Apple’s Genius Bar or sit at individual tables for more personalized service.

The first-floor displays were a little busier than Apple’s, but still clean enough to make the products inviting and accessible.

But the variety of products the store sold was a double-edged sword.

While the store was clean and organized, it could have benefitted from placing more inventory in back rooms and making the products stand out more. This display divided my attention among several items.

The upside was that the Microsoft Store was more likely to show you something you haven’t seen before.

For example, each of the three floors had a virtual-reality section. I tried two of them and came away excited about the idea of owning a VR headset.

In general, the store reflected Microsoft’s strategy to appeal to a customer base more focused on processing power …

Apple, meanwhile, positions its products as luxury items that are aesthetically pleasing and easy to use.

While Microsoft’s store wasn’t as coherent as Apple’s, it gave customers more opportunities to be surprised by items they might not already own.

Apple wants customers to buy into a network of products that look and feel similar. The advantage is that if you own an iPhone, for example, it’s pretty easy to figure out how to use an iPad. There’s less overlap between Microsoft Office and an Xbox; they provide more differentiated experiences and higher learning curves.

Apple’s product strategy and aesthetic brilliance gave its store an edge over Microsoft’s. Each of the items in Apple’s Fifth Avenue store was intuitive, and the minimalist design never made me feel overwhelmed.

Microsoft’s store had a more difficult task in trying to sell a range of products that don’t necessarily look like one another or operate in similar ways. While you’re more likely to come across a product that’s completely different from something you own, you probably don’t want to spend the time necessary to get a grasp on a video-game console or DJ software when you’re in a crowded retail environment.